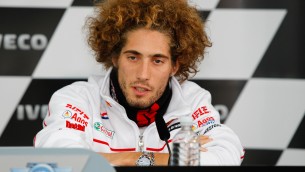 On lap two, Simoncelli lost control of his Honda which then veered across the track into the path of Colin Edwards and Valentino Rossi. The race was immediately red flagged to allow medical personnel to attend to Simoncelli and Edwards.

Simoncelli was taken to the circuit medical centre by ambulance, but at 4.56pm local time, it was announced that he had succumbed to his injuries.

Due to the circumstances the race was not restarted.