After last month where things were all report and no photos, for June we change it around – I had to do track lights duty so only a summary report, and Andrew joined us again from AKD photos, so pics aplenty. Please contact him if you want a shot of you or your pilot in action at http://www.akdphotos.com/ .

As you would expect in June, things were chilly with a gloomy sky that threatened, but never actually delivered rain. A cool breeze stiffened through the day and although it was occasionally sunny, you would never say it was a great day to be out of doors. So good on those who turned up to have a go – here’s what they did: 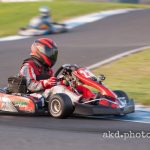 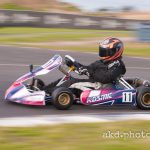 Jai Stephenson took all before him in Light, winning all the heats and the final, Joshua Hocking and Bradley James followed him home after always being in the top few finishers, while in Heavy only the three of them and Benjamin Moss took the win with Chloe Ponton and Braden Clark behind him. 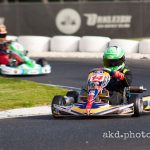 Cadel Ambrose and Toby Dvorak in a class of their own here and drove away from the field in pretty much every heat, Ambrose two wins and a 3rd, Dvorak two  2nds and a win, and Rusty Ponting spoiling Ambrose’s party taking 2nd in the 2nd heat. Thomas Schmidt had a consistent day with three 4ths, but didn’t get out the gate for the final, so a case of what could have been for him. In the end Dvorak took the chocolates ahead of Ambrose, with Ponting back in 3rd. 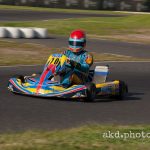 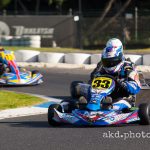 After a Heat 1 DNF nothing was going to stop Jack Scanlon who went on to record a win in each Heat and then took out the Final to stamp his authority on TAG Light, while Ray-Yu Wang who had been thereabouts all day came home in 2nd followed by Kain Kugimiya who was also up front in every Heat. In Masters we saw an assortment of DNF’s in the Heats but come the Final Mick Fisher pressed ahead to win ahead of Vern Kranz and Shane Alabaster. 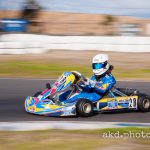 Good to see more than a handful of KA3 Juniors lined up this month, including an International visitor in Jie Kao who explored the limits of the Oakleigh circuit for the day. Matthew Hillyer was the dominator here though and won two of the Heats and then the Final ahead of Kai Upiter and Oliver McNaught. 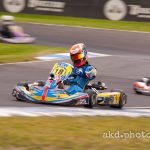 More of a mixed bag here with a different winner in each Heat: Cameron McLean, Michael Carless and Jack Martin all having a shot at greeting the finisher (good job by Jack Bell today too – stepping in to fill this position) while Joel McPherson, Mark Appleby and Caleb Citrine rounded things out in each Heat. Come Finals time however it was Martin who got the job done, ahead of his two main rivals McLean and Carless 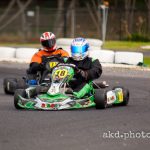 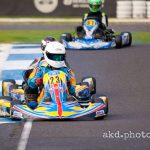 I’m sure they were all having a great time out there, but I have to say a bit of a snooze-fest to watch as we had only three entrants in each class. In Medium it was Kyle Frencham another to suffer a Heat 1 DNF then go on and win everything else, leading home Justin Bonacci and Adam Corbett who had a spectacular Heat 3 DNF when he dropped a chain and managed to disintegrate his chain guard at the same time, I’m told leaving bits of it all around the circuit leading into the Carousel. Back in Heavy Brett Pennington scored what I think might be his first race win in Heat 3 (sorry if I undersell you there Brett!) while David Martin took the other 2 Heats and triumphed in the Final ahead of Pennington and Darren Kemp 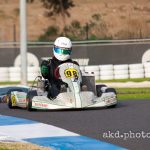 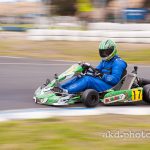 Alexander Grutteria and Andrew Sotiropoulos tie for the award for the longest name in this class (although George Anastasopoulos in TAG R Medium would put them both in the shade!) and also shared all the wins and 2nd places in the Heats leading home a consistent Ross Stubbs who finished 3rd every time, including the Final where he followed home Grutteria and Sotiropoulos who were 1 and 2. In Medium it was William Donnison in everything except the one the mattered as he took wins in all the Heats, but followed Zachary Marshall home in the Final, and they led Nathan Orton across the line as he finished 3rd. 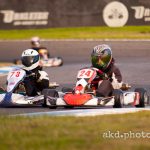 All day long it was Liam O’Donnell, Samuel Gibson and Damon Woods in Cadet 12, although Tyler Knowles, Thomas Patching and Jack Lawson were all up there at stages, but come Finals time it was Gibson and O’Donnell fighting it out, while Woods had to start from well back courtesy of a DNF in Heat 2 and a spin in Heat 1 that dropped him back in the field. O’Donnell and Gibson were evenly matched for the whole Final and O’Donnell led most of the way but finally Gibson pounced when, after a few half looks at JSKC, he carried it off as they began the last lap. He held on to take the win in a flurry of fist pumps ahead of O’Donnell and the recovering Woods. 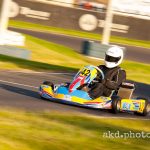 Feature Class today and yet another where a Heat 1 DNF to Carless then saw him not headed for the remainder of the day. He went on to take the win ahead of Zach Morris and Kyle King.