September Club Day at Oakleigh began with a downpour before Qualifying, then sunshine, then it blew up a gale, then more rain – why would you live anywhere else but Melbourne in spring?

As I was also doing flags, the report this month is just on the Finals. Thanks must also go to Andrew Daley from AKD Photography – contact him at www.akdphotos.com for copies of yourself or your young pilot in action. 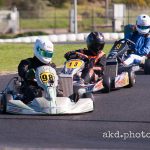 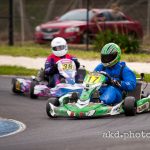 Andrew Sotiropoulos and Alexander Grutteria shared the wins in the Heats and started off the front row for the Finals, Matthew Duncan and Nicholas Flodstrom behind them, but Sotiropoulos took off at the start and was never headed. Further back in Medium Zachary Marshall started off pole with Nathan Orton beside him and Andrew Ceravolo behind him and the Mediums held this order for the entire Final, while Lachlan Vandermeer moved through to 3rd in Light behind Sotiropoulos and Grutteria who filled 1 and 2. 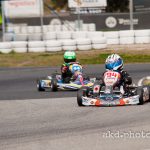 All day long Cadel Ambrose and Toby Dvorak battled it out in Cadet 9, Ambrose taking two wins, Dvorak one – behind them as the Final got underway we find Benjamin Birchall, Giancarlo Artho, Hayley Zammit, Xavier Avramides, Charlie Nash and Charlie Blanchard, but at the go it’s Ambrose and Dvorak who resume hostilities. Lap after lap they go around glued together but gradually Ambrose pulls a small gap and take the win, Birchall gets ahead of Artho with 3 to go and holds on for 3rd, then a gap back to Avramides, and Zammit gets the better of an early battle with Nash to take 6th. 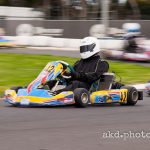 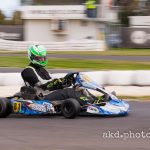 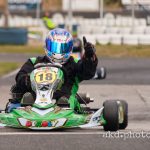 Three classes combined here so a bit to keep track of: Justin Carless leads TAG Heavy away ahead of Kyle King, Vern Kranz and Brendan Jenner, in KA3 Medium Adam Corbett has had the upper hand over Thomas French and in KA3 Heavy David Martin leads Brett Pennington and Darren Kemp as we get the finals going. Carless and King put on a good dice out front of TAG Heavy, a gap back to Kranz, while Jenner is out at Page Bros corner – in KA3 Medium Corbett leads French, while Martin holds sway in KA3 Heavy. Carless holds out King in the end to take the TAG win, the others unchanged. 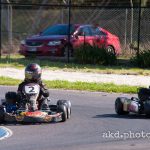 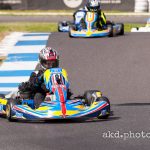 Joshua Hocking and Bradley James put on a master class here in the Heats, two wins to Hocking and one to James ahead of Callum Potter, Matthew Hillyer, Samuel Gibson, Joshua Mazurek and Mason Kelly, while in Heavy Lotem Ben Yosef clean sweeps the Heats ahead of Braden Clark and Jakob Searles. As the Final begins Hocking and James go away with it again, and Ben Yosef moves through in Heavy – then catastrophe for James as he drops a chain at the Carousel taking all the pressure off Hocking who cruises to an easy win ahead of Hillyer and Potter, while Ben Yosef continues his domination in Heavy. 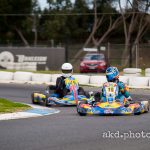 Bryce Fullwood takes the win in all the Heats – not a bad effort after he Qualified in 6th in a wet session – Michael Carless taking three 2nds, and Jack Martin taking three 3rds, so things looked a little predictable here. Predictable they proved to be with Fullwood repeating earlier performances and driving away with it, Carless following in a somewhat distant 2nd, then Martin who held off a charge by Adam Pasek in the last lap to take 3rd. 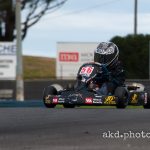 Damon Woods the dominator here, winning all three Heats and Liam O’Donnell second in all 3 as well – Chloe Potter a great job to take three 3rds, then Thomas Patching took all the 4ths – so looked like another predictable final. So it proved to be, although Potter and Patching had a tussle for 3rd, Patching not able to find a way past, while Woods and O’Donnell home well before them. 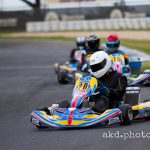 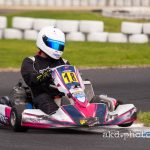 A bit more variety with the winners here: Kain Kugimiya wining two Heats and Daniel Griffin the other one in Light, while in Masters a different winner every time: Richard Matera, Mick Fisher and Vern Kranz sharing wins and DNF’s as we worked through to the Finals. As we begin Finals another new leader pops up as Jack Scanlan shoots through in Light, back in Masters it’s Matera then Fisher but on Lap 5 Fisher is out at the JSKC cut through with a problem of some sort and I believe that, and a DNF in Heat 3, sees him surrender the Championship lead for the year, so some work ahead for him in the remaining Club Days. Meanwhile in Light Griffin moves to the front, then with 7 to go the rain returns! A few slippery laps and then a bit of wind and sun and we’re back to normal, and this sees Griffin lead Kugimiya home in Light, and Kranz take the Masters win ahead of Matera.